About the Jack Holt designs
Jack Holt's premises were alongside the Thames and his1946 National 12 design (the 500 series) was intended for river sailing, particularly at Ranelagh, but turned out to be a good all-rounder. The 500s had a wide, V'ed, transom and a very pronounced keel rocker.

Holt continued to produce National 12 designs, but though a process of continual evolution, modifying and improving on existing moulds, so that each batch of boats was a development of the previous one. Here are some photos of later Holt 12s.

N858, Koh-i-noor, sailed by Bob Tillett, winning a race at Wroxham in 1951. Bob crewed in Flip McGilda at Ranelagh, and raced against Robin Steavenson, Mike Noakes and Cliff Norbury on the Hamble and at Wroxham. Bob had sailed an Uffa King (N168, June) and a modified Uffa King (N515, Figaro) but says "when the Jack Holt boats appeared I had to have one". 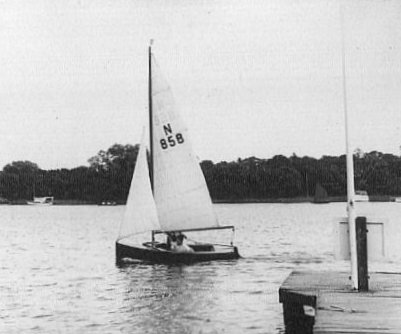 Jack Holt is famous for his many other boat designs, notably the Enterprise (1956), GP14 (1960), and Mirror (with Barry Bucknell, 1962), and for his designs for fittings and chandlery.