The history of the National Twelve Class

In 1935 the only dinghy raced on a national basis was the expensive International 14, so to encourage dinghy sailing the RYA published the rules for a simpler and cheaper boat - the National 12. The original rules were simple:

These rules have been subtly modified over the years to take advantage of cheaper non-clinker construction methods and modern materials. 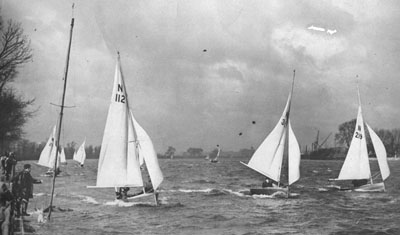 Early river sailing on the River Thames at Ranelagh 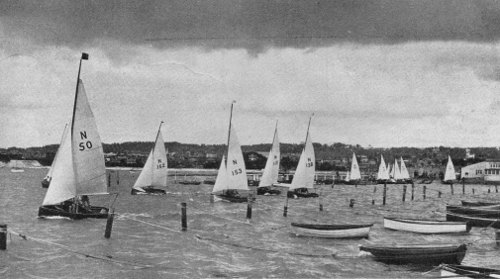 N1 "Gipsy" was designed by Uffa Fox and launched at Cowes in April 1936. The Twelve proved extremely popular and by the first championships "Burton Week" in September of that year over 150 boats had been built. The Burton Week takes it's name from the Burton Cup that is the highlight of the championships. The original Burton Cup was presented by Sir William Burton, KBE, the Chairman of the Yacht Racing Association (for-runner to the RYA) for one of the races during the Burton Week held in Poole Harbour in 1936 and was won outright by Cyril A. Stollery. The following year Sir William Burton presented the present cup which remains the premier challenge trophy in the Class. 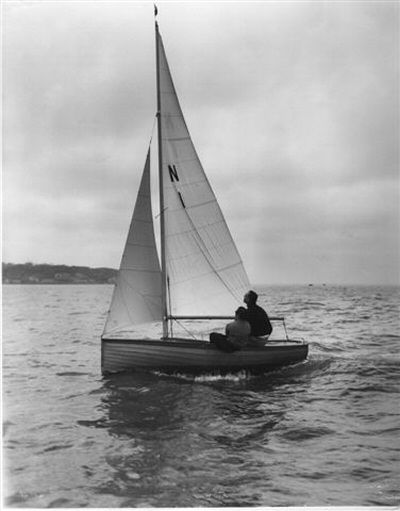 The Burton Cup. The requirements for the Burton Cup are that the race should be held on open water on a triangular course and with a start to windward. It is currently sailed over four laps, twelve legs, of a course with the legs of about one mile, prior to sailing to the finish line. The cup will not be awarded on the results of a race shortened in any way. Should that occur, the trophy advertised for the following day will be awarded instead, and the Burton Cup race will be re-sailed. 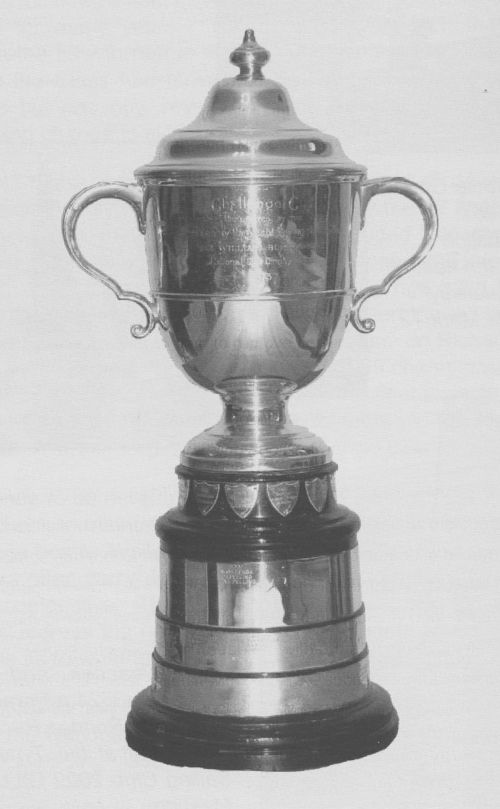 From 1936 to the present day the class has continued to develop. Rule changes have been made where necessary, for example, a minimum width rule was introduced in 1937, and a maximum width in 1980. The construction techniques used have evolved from the riveted ribs "Ribby" technique used to fix planks together in the 1930s. In the 50/60s clinker and 7-plank construction were the order of day.

Clinker construction went out in 1970 with the development of GRP hulls and 'four plank' wooden construction, cold-moulded construction was also used in this  period where several layers  of thin plywood veneers are wrapped around a frame and bonded together to create a smooth rounded hull. In the 80s glass fibre single skin boats were built. Since the 90s boats have mostly been built using glass or carbon foam sandwich but there continue to be notable exceptions to this with some fine and pretty fast wooden boats also being lovingly built. 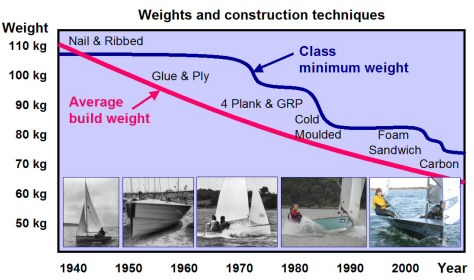 Evolution. The all up weight of hull, rigging and foils has reduced as technology has improved

The rigs have also steadily evolved. Early masts were wooded and some early vintage boats still sport wooden masts. Ian Proctor started experimenting with metal masts to replace wooden spars in 1952 and terylene sails arrived in 1954 and aluminium masts were standard from the late 1950s and carbon masts were common from the late 1990s. Reflecting the changing construction techniques and materials available the minimum weight of the boats has reduced over time. The minimum weight was reduced to 80kg in the 1980s. A further reduction in late 1990s and a recent reduction in 2000 brought the minimum weight down to the currently 78kg (this includes mast & centre board), reflecting the ability of even amateur builders to build lightweight hulls..


Join the association and receive;

plus Support the Association to;

Read about the history of your 12 on the Boat database

Watch the 70 years of development video

Vintage Twelves are those with clinker built hulls. The earliest boats, from 1936 until 1952, are of traditional ribbed clinker construction. The most common designs are the Uffa King, Holt 500 series and the early Ian Proctor designs. At this time, designers (and everybody else) believed that 12 foot boats were too short to plane, so they all have deep-chested V's hulls. They are most satisfying to sail to windward, but they will only plane in strong winds. 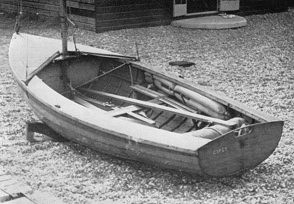 N1 a fine example of early ribbed and clinker construction

In 1952 the first glued clinker boats were built, these were durable and easily maintained and so this method of construction became universal. In 1958 the first fully planing N12 was designed representing the most important land mark in the development of the class. The Proctor Mark VIII instantly outclassed all previous designs in open water conditions. Subsequent very successful designs were the Landamore Sparklet, Mike Jackson's March Hare and Phil Morrison's China Doll. A taste of the future was the Mr Jones hull - the first ultra-wide TWELVE. Lovely looking and fast but woe betide you if you heel this boat more than about 20 degrees - which isn't a lot!!

In 1970, the Class adopted four plank construction and several designs of this period appeared in both clinker and four-plank form, notably Phil Morrison's China Doll and Whisper hulls. In the early 1970's, glued clinker construction disappeared in favour of four-plankers and here our Vintage era sadly ends.

Proctor Mk6 sailing on the river at Trent Valley, Nottingham

Anyone buying a vintage boat should be aware that although most designs have been produced with the ultimate aim of winning the Burton Cup, some have been specialised for other purposes or have by accident produced boats which are particularly suitable for certain weather conditions or types of water. The Proctor IX was an outstanding light weather hull (but hairy in a blow). The Proctor IVa and the Mike Nokes Starfish were outstanding river boats.

Also, you cannot expect a Vintage twelve to be competitive with modern boats in planing conditions. Vintage boats are however surprisingly competitive on smooth water and in lighter winds especially if they are in good condition and down to weight. 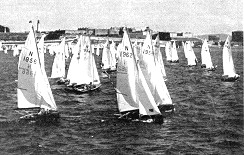 The TWELVE Association encourages the restoration and use of Vintage boats by arranging special events for them. There is a well established Vintage Section which looks after the interests of Vintage boat owners.

Help us make sailing more varied and more visually attractive by putting your clinker boat on the water. Read more about the vintage designs in the designs section.

Watch the 70 years of development video